Work of the Week 7: Green Snapper Fish by Olga Marshall 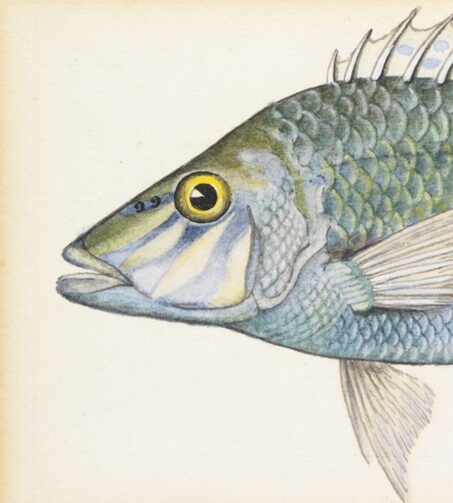 There is a niche in the pantheon of artists for those who dedicated their skills to the meticulous recording of the world on paper. The marine life watercolours of Olga Marshall (1921 – 2020) were part of this tradition, which modern day photographic reproduction has tended to eclipse. The work of Michelangelo, whose desire to base his work on a perfect imitation of nature, led him to the dissection of human corpses left us his detailed anatomical drawings, which were to inform generations of doctors to come. Similarly, Henry Tonks (1862 – 1937) had been a surgeon at the Royal Free Hospital before his career at the Slade School of Fine Art and established a reputation through his finely executed watercolours of First World War soldiers who were receiving plastic surgery. In the absence of sophisticated photographs his finely executed watercolours became not only vital medical records but were also important in diffusing knowledge. Until quite recently hospitals still relied upon their Medical Illustration departments, before giving way to Medical Photography.

Olga Marshall, who died in November 2020, was part of this tradition – her masterly hand complementing many books written by her husband, N B Marshall, whose work as a leading marine biologist won him FRS status. Her first work in this respect, illustrating Aspects of Deep Sea Biology (1954) was described in The Times as ‘perhaps the most beautifully illustrated scientific book so far produced this century’.  She subsequently went on to write, illustrate and produce children’s books about sea and pond life.

The Marshalls were already living in Park Lane, Saffron Walden when Edward Bawden became a neighbour. They were soon friendly and ‘Freddie’ Marshall’s name features regularly in Bawden’s engagements diary for an evening when, over a whisky, they could put the world to rights.