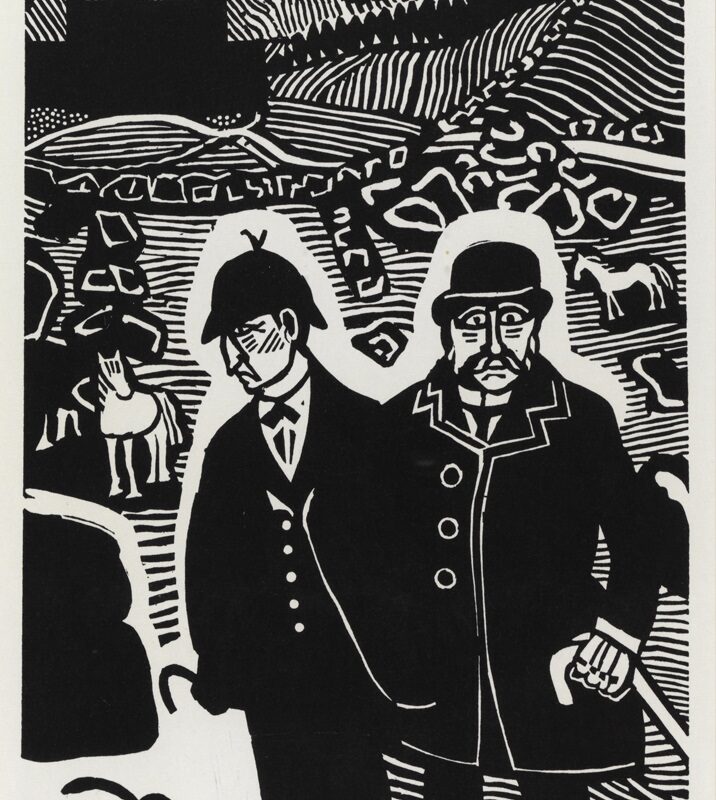 After Edward Bawden had completed late in 1981 sixty-eight illustrations for the three-volume Folio Society edition of Mallory’s Morte d’Arthur, he was reluctant to undertake more book illustrations. However by 1984, he agreed to provide six illustrations for a Folio edition of Conan Doyle’s Hound of the Baskervilles. His reluctance may have given rise to a form of ’artist’s block’, because after a ‘hellishly difficult’ start, he was about to abandon the project when a ’minor miracle’ occurred.
We can now share what happened, because in 2018 Mr Kevin Herring presented to the Fry Gallery 210 letters written by Bawden to his father, Ivor, between 1954 and 1989, and in an undated letter (probably November 1984) Bawden sets out the chain of events which culminated in the linocut Sherlock Holmes & Dr Watson, (Permanent Collection [PC] number 91) and the frontispiece in the 1987 edition of the famous novel (PC 1123).
In the following extract (PC 2804/113) we can follow what happened, and visualise the moment when this normally painfully shy man accosts a perfect stranger about his apparel., and then return to the linocut – showing the deerstalker hat which is also now in the Collection!

So in your opinion I am not by nature qualified as an illustrator of The Hound of the Baskervilles? Perhaps you are right. It was hellishly difficult doing the first one. I was in despair and sat down to write a letter of defeat to the publisher but felt ashamed of myself and decided to take a walk in the park. On my return I tried again and a sort of minor miracle happened, the dirty marks on the paper seemed more promising. Next day as I left early in the morning to go shopping I spotted a brisk little man who seemed to be wearing the right headgear, I caught him up, touched his arm, “Sir”, I said “are you wearing a deerstalker”. Yes he was. “Is it the sort Sherlock Holmes wore?”. He took it off and gave it to me. I was thrilled. Half an hour later I bought a deerstalker for myself. Wearing it has solved all my problems. Well, I suppose I must bring down the prints to show you when Chris and I arrive at Heligan in the New Year.

It is now bed-time and I don’t feel in my present tired state that I can add much more to what has been written. So good-night and love to both of you.