Work of the Week 4: Self Portrait, Kinlochbervie by John Bellany 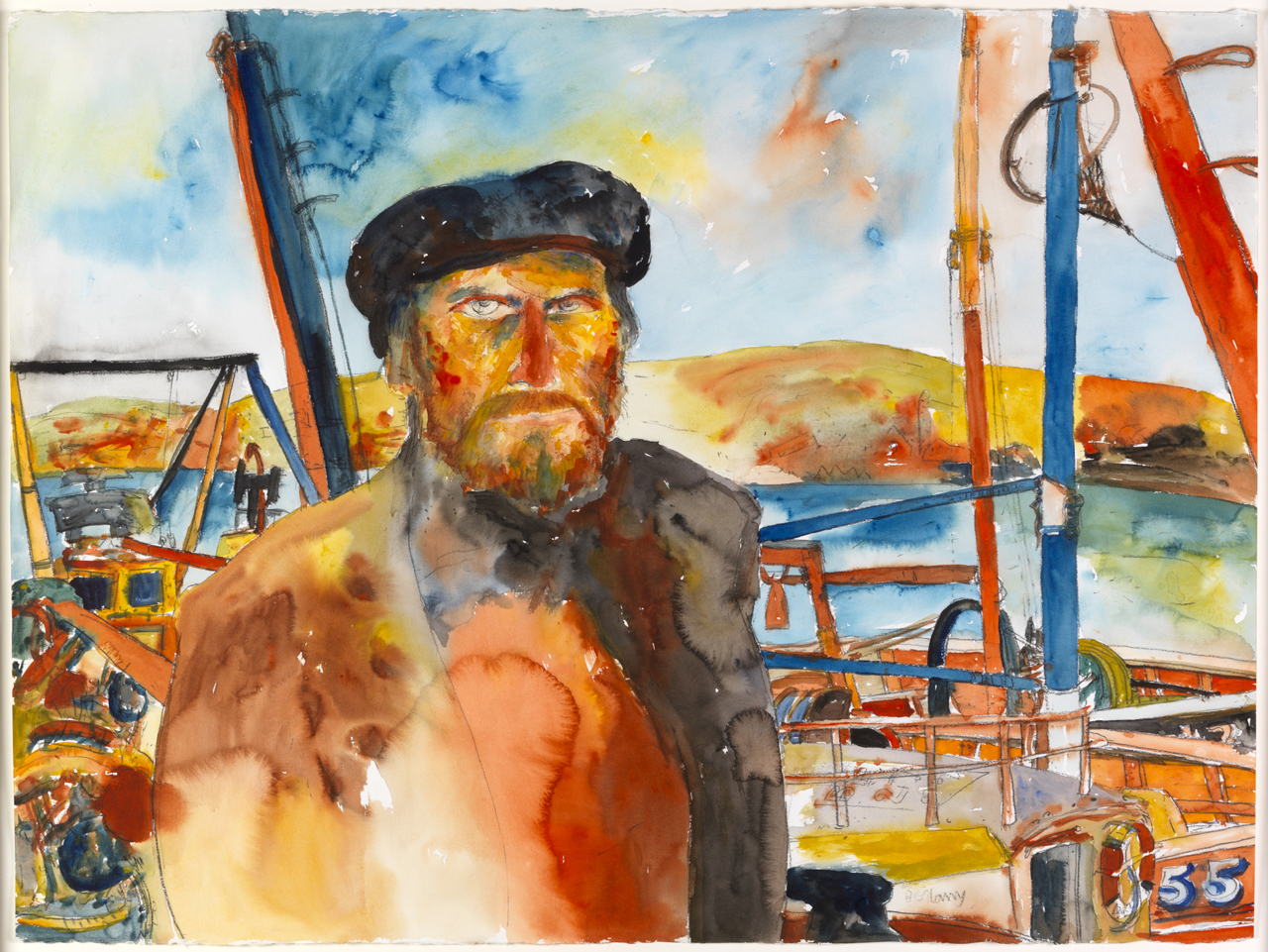 “It’s an ill wind that blows no good” runs the old idiom, and it was the wind of illness that blew John Bellany (1942-2013), a redoubtable Scot, to Saffron Walden in 1990. Having graduated from the Royal College of Art in 1968 Bellany had by 1986 made his name sufficiently enough to be the first artist to have a one man show at the National Portrait Gallery in London and in the years to come was to establish himself as one of the most distinguished British artists of our time ,expressing his intensely personal response to life and landscape.

Problems of liver failure in the 1980’s almost killed him, but in 1988 Sir Roy Calne at Addenbrooke’s Hospital Cambridge offered the chance of what, at that time, was still innovative practice – a liver transplant. The success of the operation was to give him literally a new lease of life, which he adopted with energy. The practical necessity to remain in touch with Addenbrooke’s led him to purchase the converted clock house at Shortgrove in Newport, a village two miles out of Saffron Walden. There he continued with his epic responses to the struggles of fisher folk in his native Port Seton, whilst at the same time widening his interest to embrace working in Germany, Italy, and China.

Bellany’s arrival in Saffron Walden in 1990 coincided with another ten years or so of intense activity, including exploration of the Italian countryside where he also purchased a house, becoming a popular figure in the town of Barga. Although, as his wife Helen puts it “he fell in love with the Essex countryside around him”, this sadly is not much reflected in his work, although in 2009 in preparation for the exhibition staged in the Fry Gallery some local landscapes were included. This exhibition, curated by Robin Gibson who had also been responsible for the 1986 NPG show, was dominated by Serendipity, a large triptych, purchased by a young couple who re -mortgaged their house to buy it. Bellany, who chose to live quietly with his family in Shortgrove, whilst always heavily engaged on work in his large studio, was nevertheless a constant supporter of the Gallery throughout the remainder of his life.

Self Portrait, Kinlohverbie, representing both the artist and a Scottish fishing background, was purchased by the Fry Gallery in 2009.

If you would like to suggest a Work of the Week, please email communications@fryartgallery.org.[/vc_column_text][/vc_column][/vc_row]