Work of the Week 31: Sample of moquette by Marianne Straub 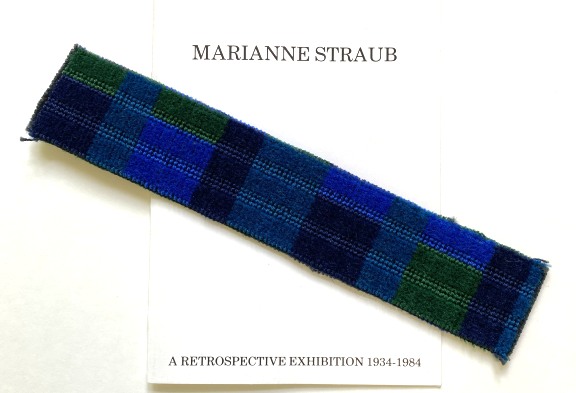 Not all of the works in our Collection are finished artworks. Moquettes such as this example, with a simple linear pattern, were used increasingly in the 1970s and 80s. This design features a geometric intercrossing ‘block’ motif of navy, bright green, sea green and blue rectangles. It was manufactured by John Holdsworth and Co Limited, as well as Firths Furnishing Limited. This design was commissioned by Misha Black in 1965. It was originally intended for use on the Victoria line, but was not ready in time so an existing design was used instead. The design was widely used on the Mark II 1972 Tube stock that operated on the Northern and Bakerloo lines, and on London Transport buses during the 1970s. Although she became a leading name in industrial design – creating upholstery for everything from London Underground to BEA aircraft – Straub almost always developed her ideas on a handloom before applying her technical knowhow to their manufacture. She believed that if more designers tried out their ideas first, there would be fewer bad results.