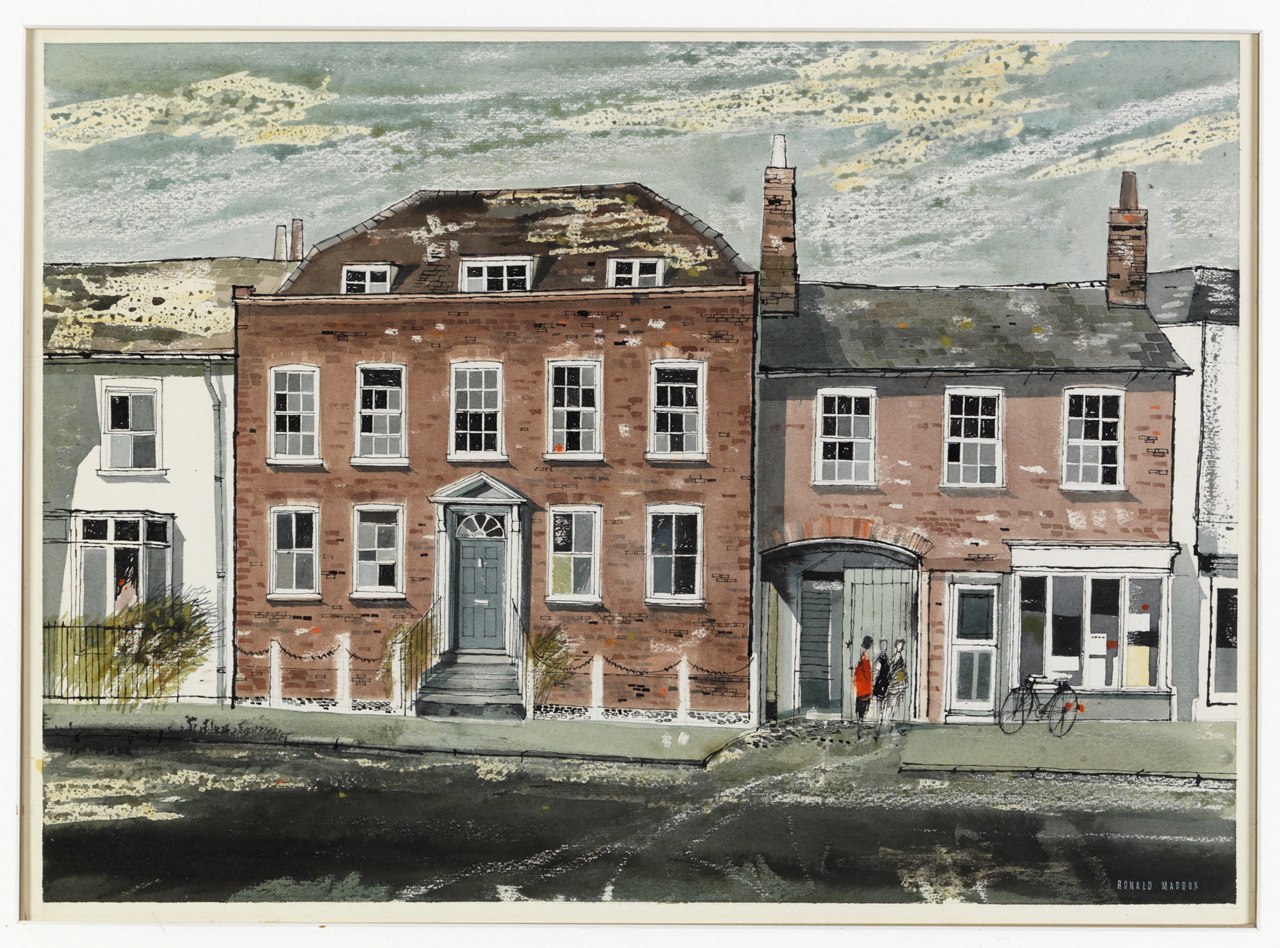 Read “The White House” and most minds turn to the famous Presidential office in Washington DC. This watercolour is an opportunity to join the cognoscente to whom the words “Brick House” immediately conjures up thoughts of Edward Bawden, Bardfield and Eric Ravilious. A Georgian house, it stands in the High Street of Great Bardfield, and has a place in the artistic legacy of this country as the residence of the Bawden family from 1931 to 1970, and for being the centre of “the most energising influences in the artistic life of the village”, as Olive Cook puts it .

Although Bawden was born in nearby Braintree, it is accepted wisdom they he and Ravilious “happened on Bardfield” following a weekend exploration away from London.  The exact date for this happening is often confused, varying between 1925 and 1932, but examination of the written evidence is that the two artists formally rented half the  house  from September 1931 (letter from Ravilious to Robert Gibbings expressly  from that  address on 11 September) and that Bawden’s father purchased the house as a present for his son on his marriage in March 1932. Until that time it had been used as a weekend retreat, enabling the two artists to pursue their intentions to become proficient in watercolour. Indeed, the work they both did in the vicinity before the second world war is important in terms of their development. Bawden was to continue in this way with several significant works based on Brick House or nearby.  Eric and Tirzah Ravilious, who had married in 1930, shared the house until September 1934 when they moved to nearby Castle Hedingham.   Malcolm Yorke’s  introductory chapter  in Bawden, Ravilious and the Artists of Great Bardfield (Saunders & Yorke, V&A Publishing in association with the Fry Art Gallery, 2015) describes the social gatherings  there and assesses the influence it had in the artistic life of the village, particularly  with the three “open houses” held in 1954, 1955 and 1958 – the forerunner of the current and extensive practice of open studios.

This watercolour was presented to the Fry Gallery by the artist, described by David Oelman, the Gallery’s Chairman, as “a talented watercolour artist and a great supporter of the Fry Art Gallery” in 2007, and exceptionally accepted into the Collection, not only in recognition of  the  masterly way in which the long serving President of the Royal Institute of Painters in Watercolours had depicted Brick House,  but also because of the tribute it renders to an important building. Ronald Maddox died in 2018, aged 88.