Work of the Week 13: A Miner by George Chapman 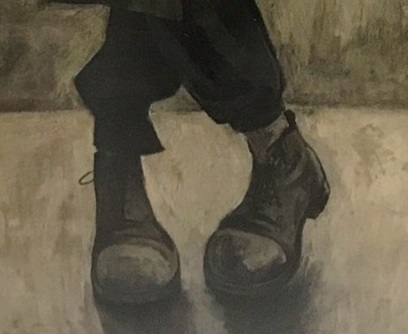 George Chapman (1908 – 1993) left London in 1951 and moved to Great Bardfield and took an active part in the thriving artistic community that included Edward and Charlotte Bawden, Michael and Duffy Rothenstein, John Aldridge, Bernard Cheese, Kenneth Rowntree and Marianne Straub. He contributed regularly to their famous ‘Open House’ exhibitions, at a time when he was making various experiments in painting in search of technique and subject matter.

From 1953 he began visiting the Rhondda in South Wales, observing the people of the coal-mining communities, the landscape and their homes. He said, ‘I realised that here I could find the material that would perhaps make me a painter at last.’ A Miner depicts, with genuine affection and respect, the hard-working backbone of a harsh environment. Standing with outsized boots and feet crossed – an unlit cigarette stub in his blackened hand – he epitomises the life of so many in that area. Behind him his co-workers, silhouetted in the sunset, can be seen in the distance returning to their homes, a bath in front of the fire and a well-deserved dinner. In the early 1900s, there were over 50 collieries in the Rhondda. In 1990, the last, Maerdy, closed with 300 job losses.

Paintings conservator, Radek Chocha (who undertook treatment of A Miner in 2018) recalls ‘(…) the main concern of the picture’s condition was its poor tension with severe planar deformations throughout and especially prominent at the centre and some tearing alongside the top edge. Furthermore, it was structurally unsound and in need of replacement of its weak non-expandable strainer, as it wasn’t sufficient to hold a painting of such size (almost 200 cm high and 100 cm wide) and allowing the adjustment of tension when necessary. The canvas rested directly on the strainer as the members didn’t contain a bevel on the inner-side edges.’

‘The treatment involved cautious removal of significant amount of surface dirt, splashes of industrial paint, fly/spider droppings and resinous staining. This considerably improved the readability of forms and the overall surface of the picture, especially in the upper background and in the coat. After taking off the strainer from the canvas and successfully addressing planar deformations, the painting was stretched onto a new bespoke 6-void stretcher and a desirable tension was gradually achieved.’

Donated by the Estate of Duffy Ayers, 2018, and photographed after conservation.