Two Women Sitting in a Garden 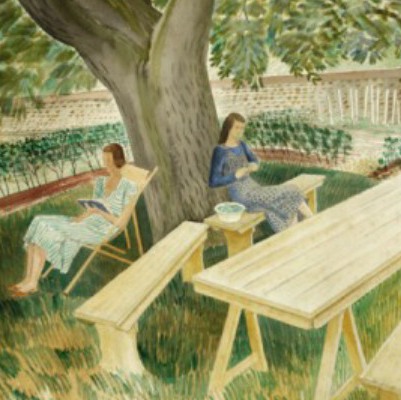 The London born and Sussex based artist Eric Ravilious was a multi-talented printmaker, wood engraver and watercolour painter. He started life in Acton in West London but grew up on the South Coast of England in Eastbourne where he discovered his love of painting, design and printing. He went on to win a scholarship to the Royal College of Art. He studied in the Design School of the College where Ravilious was befriended by fellow artist and tutor Paul Nash. He also became friends, and collaborator with print-maker Edward Bawden.

He married fellow artist Tirzah Garwood who was a talented printmaker in her own right in 1930.

He painted many watercolours showing the landscape and rural life in the South Downs and these pictures rarely included people, instead including animals, agricultural tools and machinery.

Appointed Official War Artist in 1940, Eric’s watercolours took a new direction. He began to use his talents and distinctive style to document coastal defences in locations such as Newhaven in Sussex, aeroplanes, warships and submarines. Indeed, it was in his role as War Artist that Eric lost his life aged only 39. He had been dispatched on a plane, in Iceland, to look for a lost aircraft but sadly, never returned.

This winsome picture shows two women, who are Charlotte Bawden, wife of Edward, reading in a deckchair leaning against a walnut tree, and Tirzah, Ravilious’s wife, preparing vegetables, by shelling peas. The garden is that in Brick House, Great Bardfield, the large house shared by both couples in the early 1930s. The house and garden was designed and decorated throughout by both couples.

This is a rare painting by Ravilious, in that it depicts his friends and loved ones, even though they are not in the foreground, where the artist instead, concentrates on the garden table and chairs.