Threshing in the Snow 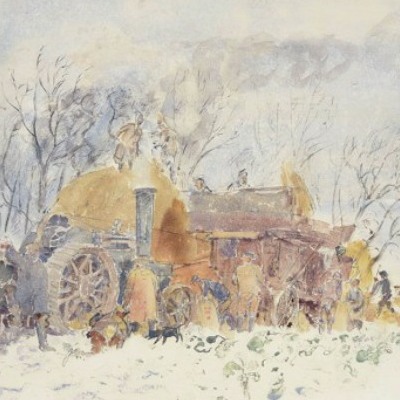 At the outbreak of war in 1939 Hennell wrote to the War Artists Advisory Commission offering his services as an artist. He worked for the Pilgrim Trust in 1940 and the Ministry of Information in 1941. Hennell was named as an official war artist in 1943 and sent to replace Eric Ravilious in Iceland. Hennell took part in the Normandy Landings and recorded the war in Holland, India and Burma. Hennell was captured by Indonesian nationalist fighters in Batavia in November 1945 and was presumed to have been killed shortly thereafter.

Hennell’s art works centred on the countryside, and in particular hedging, threshing, baling, and clearing orchards etc. Hennell was a member of The Royal Watercolour Society and exhibited in The New English Art Club. As an artist he recorded the surrender of Singapore during World War II.