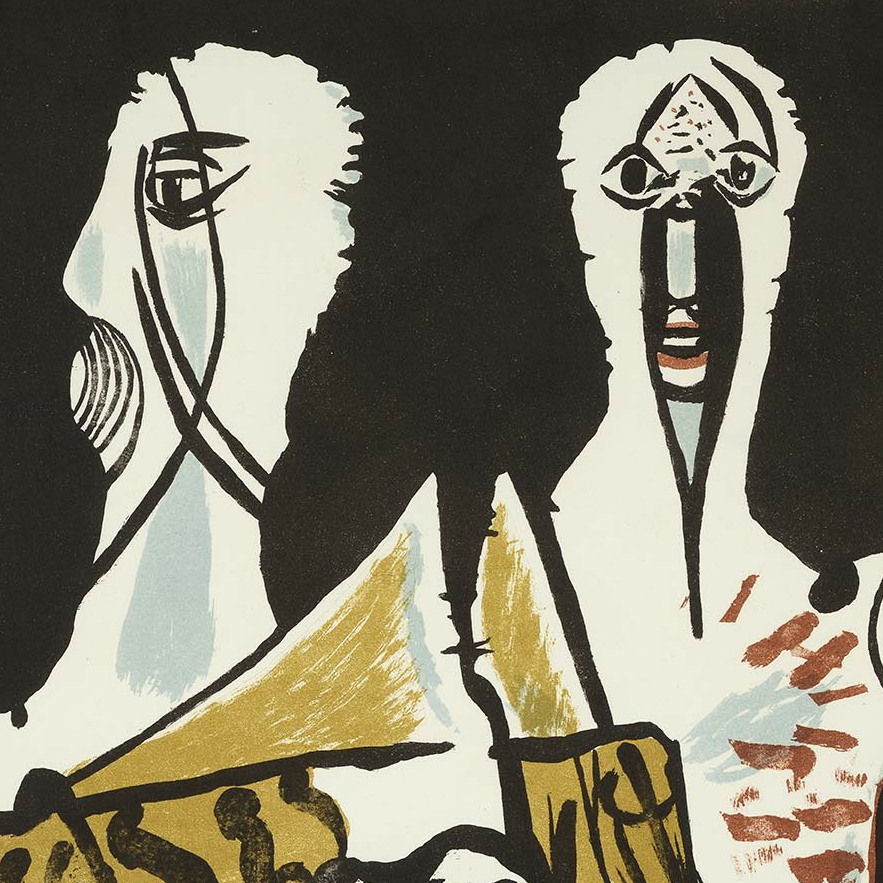 This lithograph is one of the first works by Robert Colquhoun, after he had decided to move from his earlier subjects of landscape and still life, two areas which he had exploited in a realistic style up until the 1940s. It was in 1943 that the Polish artist Jankel Adler had encouraged him to use his imagination more, resulting in more abstraction in his paintings, instead of using pure observation. This imagination also led to the use of more figurative and animal styles.

In this work two apparently masked or helmeted figures are shadowed or watched by a large horse’s head in the foreground. It can be concluded that Colquhoun was influenced by Picasso with his use of bold and colourful simplified forms. There had been a recent and significant Picasso exhibition in London, which Colquhoun had attended.

Figures on horseback feature in further works from his career and the Fry Art Gallery holds other lithographs by Colquhoun, from the 1960s, where figures and animals are represented using similar palettes.

Robert Colquhoun was born in Kilmarnock, Scotland and studied at the Glasgow School of art, where he also met his long term lover and artist partner Robert MacBryde. They became known as the ‘Two Roberts’, and counted amongst their friends leading artists from the London art scene after the war, including John Minton, Lucien Freud, Francis Bacon and Michael Ayrton. Colquhoun was also know for his printmaking and design work, particularly for Shakespeare plays and ballet sets, both in London and Scotland.

After the two Roberts left London, in 1950, they lived at Tilty Mill near Great Dunmow for the next four years.