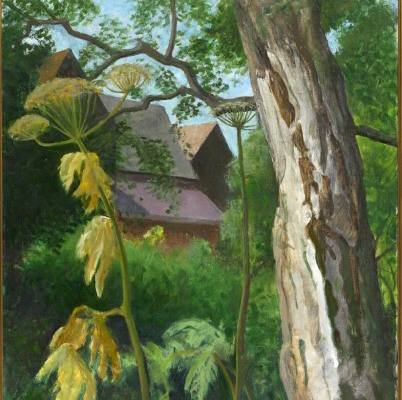 Presented by the executors of the Aldridge estate

John Aldridge loved painting the landscape and particularly his garden and the environment around his house in Great Bardfield. Many of his oils demonstrate his passion for flowers and trees and this work from 1981 is a prime example for his fine use of colour and detail for a pastoral scene, probably executed at the back of his house nearby. As with most of his work, there are no human figures in this picture, but a careful depiction of flowers such as hemlock and also here, a silver birch tree. Aldridge often made detailed drawings and paintings of individual plants, and he was always keen to describe the many specimens in his well stocked garden to any visitors.

John Aldridge lived in Great Bardfield from 1933 until his death in 1983. He lived at Place House and created a beautiful garden, which was much admired by Edward Bawden, another artist and garden lover, who lived just down the street from Aldridge.

He had no formal training but painted from an early age. He played a part in the ‘Seven and Five Society’ of artists in 1931. He became recognised internationally following the Venice Biennale in 1934, where he exhibited. Despite most of his work featuring landscapes and nature, he was also a fine portrait painter. The Fry Art Gallery has a considerable holding of his work including drawings, wallpaper designs, and oils.