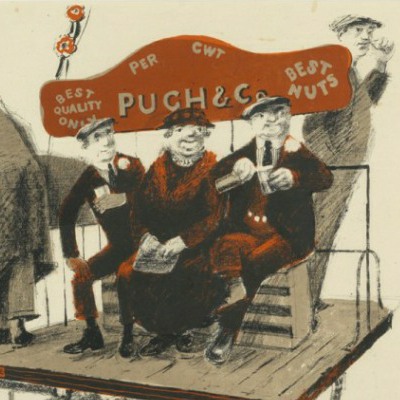 Presented by the artist

Bernard Cheese was a painter and printmaker, who studied at the Royal College of Art from 1947, in London, where he studied alongside Walter Hoyle and Sheila Robinson, and his teachers included Edward Bawden and Edwin La Dell. In 1951 he married Sheila Robinson, an artist from Nottinghamshire. They divorced in 1968 and he married Brenda Latham Brown, a former student. His daughter Chloe Cheese (with Sheila), Joanna Cheese and Sarah Cheese are also artists.

He was a quiet observer of everyday life, whether it was sketching among the rocky inlets of coastal areas, exploring the North Yorkshire moors and looking out over the vineyards of Provence, where he expressed a fascination with landscape and the patterns imposed by man on to nature. A keen draughtsman, he sought out interesting vernacular architecture as subjects for his lively watercolours and lithographs. He painted thatched farmhouses in Essex, fishermen’s cottages nestled between a quay and hillside at Staithes, in Yorkshire, and the sun-baked medieval hill towns of southern France and Italy. In his work, women chatter at a street corner, men are drinking beer, children play games, farmers tend their livestock and seafarers repair their vessels. He was also a storyteller and if you look closely at his prints, such as First Prize, you can observe a community going about its daily business, where occasions such as fetes and competitions are important parts of village life.

Though Cheese’s work can come across as whimsical, his seemingly light-hearted touch is rooted in sound draughtsmanship and a well-structured composition.

These happy contestants are taking part in the Cart Horse Parade in Coronation year, 1953.  It was traditionally held on Whit Monday and its founder chairman was Sir Walter Gilbey Bart, whose descendant, Walter Gilbey, chairs the current parade committee. The objectives of the parade were to improve the general condition and treatment of London ‘s working cart or heavy horses and to encourage drivers to take a humane interest in the welfare of their animals. The first parade was held in Battersea Park and attracted 102 entries and the following year, entries were accepted from those who owned carthorses stabled within a seven mile radius of Charing Cross , attracting 383 turnouts. In 1888 the parade moved to Regents Park and after the presentation of prizes, turnouts would then drive around the park before setting off across central London . Due to the popularity of the parade, entries were limited until 1914 to 1,000 but in time, with the introduction of motor vehicles and mechanisation in general, and the resulting demise of horses as a means of transport, the entry gradually decreased.