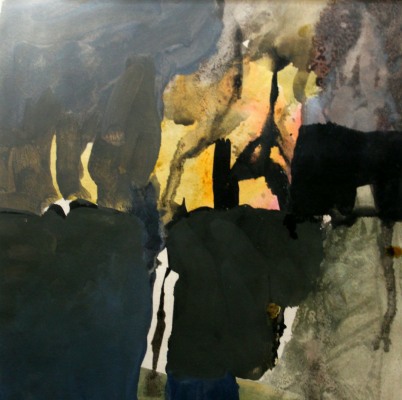 Purchased with grant aid from the Art Fund, the Victoria & Albert Museum Purchase Fund and the National Heritage Lottery Fund

Until the practice was banned in 1993, arable farmers in East Anglia used to burn straw and stubble after harvest.  Keith Vaughan’s home at Toppesfield was surrounded by farmland, so this would have been an annual sight for the artist.

Keith Vaughan knew the East Anglian landscape well before he settled in Toppesfield, Essex in 1964, with his partner Ramsey McClure. From the 1930s onwards he had travelled all over Suffolk and adjoining counties seeking out subjects for his painting and he was painting barns and other farm buildings in the rural landscape at the time. These pastoral subjects continued to attract him into the 1960s and early 1970s after he had moved to Toppesfield.

In this painting, we see familiar abstract images of a burning stubble field, something not now witnessed in the countryside. Despite the abstraction the form and structure are clearly evident and even though there are no discernible human figures in this picture, Vaughan was keen to illustrate the intervention of man in the landscape. Similar depictions of colourful forms and structures in the landscape are seen in other works by Vaughan at the Fry Art Gallery, such as Troy Farm and Harrow Hill III.

Even though Vaughan had no formal art training, he became a significant player in the British post war art world. He counted many of his friends among the Neo Romantic artists at the time, such as Graham Sutherland and John Minton. His art was heavily influenced by his sexuality and he is best known for his work which centres around the male nude in the landscape. As he got older his work became increasingly abstract.