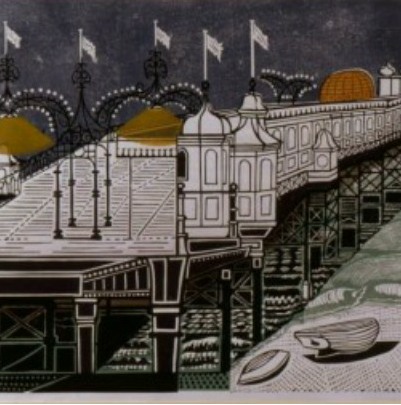 This linocut was first printed in 1958, and became one of Edward Bawden’s most iconic and easily recognised images. It is characteristic of Bawden’s bold graphic style, with strong black lines simplifying the complex iron structure of the pier. The light radiating from the lamps, the texture of the waves and the shadow on the sea under the pier, show use of more subtle forms. As Bawden did not have a large press in his studio, the print would have been pressed on the floor, using the weight of his body. There are also some collage type effects in the work which point towards abstraction amongst the strong images. The distinctive domes of Brighton’s famous Royal Pavilion and the architectural details of a regency townhouse, frame the image of the pier.

Edward Bawden was the most firmly rooted artist from Essex represented in the North West Essex Collection, as he was born in Braintree and settled in Great Bardfield from the mid1920s and in1932 moved to Brick House. He then lived in Saffron Walden from 1970 until his death in 1989. He had been an official war artist and good friend of Eric Ravilious, who he met at the Royal College of Art, under the tutelage of Paul Nash.

His influence on illustration and design cannot be over-estimated and he was very prolific in all he did. His work is described as quintessential English, and often illustrates a strong sense of humour and observation of people. As well as many artworks in both watercolour and oils, he illustrated numerous books, brochures, cards and posters on a variety of subjects. His distinctive use of linocut raised this medium to new levels and he is best known for his virtuosity and techniques in creating linocut prints. The Fry Art Gallery has a significant holding covering all areas of his work as well as many other documents such a letters and personal papers, photographs and objects related to his life.