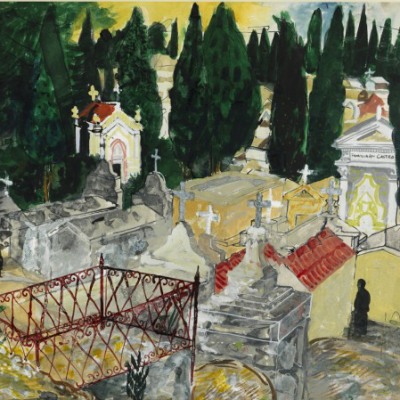 Walter Hoyle (1922 -2000), born in Lancashire, was educated at Beckenham School of Art and the Royal College of Art. In 1952, he moved to Great Bardfield, encouraged by Edward Bawden after their successful painting trip to Sicily. He showed his work in the three Great Bardfield open house exhibitions in 1954, 1955 and 1958. At the first exhibition, he met his wife Denise and they lived in the area for the next twenty years, together with their children James and Nina. Walter undertook his own work, commercial commissions, and teaching throughout his life. After teaching at St Martin’s and the Central School of Art, he taught printmaking at Cambridge School of Art from 1964 until 1984. After retiring, he and Denise moved to Hastings and spent time at their flat in Dieppe. His art spanned a huge range, from watercolour landscapes to abstracts and experimental prints – he was a versatile artist.[/vc_column_text][/vc_column][/vc_row][vc_row][vc_column][vcex_spacing size=”15px”][vc_column_text]Walter went on a painting trip to Sicily with Edward Bawden in 1951. Their time was spent mostly in and around Enna, a hill town in the centre of the island. Many of the pictures he produced were shown in a one man exhibition at the Leicester Galleries in 1952. Some were included in the exhibition Watercolours and Drawings by Edward Bawden and Walter Hoyle of Enna, Sicily at The Fry Art Gallery in June 1998.