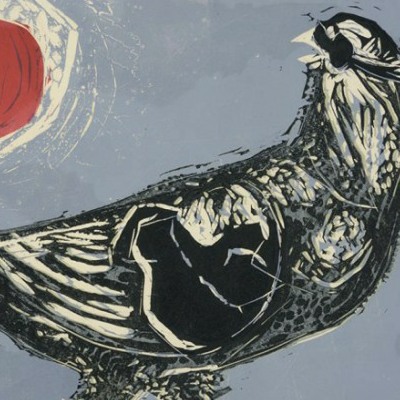 Purchased from The Nottingham Education Trust

Michael Rothenstein, son of Sir William Rothenstein, was viewed as the most modernist artist who settled in Great Bardfield, following his early inspiration from artists such as Graham Sutherland, and many European artists such as Picasso. He is well known for his print making using different media and techniques. In the 1940s and 1950s his prints were mainly of conventional subjects, inspired by the landscape and agricultural activities in rural Essex. Farm machinery was a recurring subject as he was fascinated by the sculptural qualities of ploughs, harrows and tractors.

After extending his house in 1954 to accommodate a printing press he adopted lino-cutting, following a suggestion from Edward Bawden who was very experienced in the technique. He felt invigorated by this medium and also turned repeatedly to motifs such as cockerels, other farm birds and the sun. His work became very colourful and ever more abstract in the 1960s and 1970s, when he started to use offcuts from trees, as printing blocks, incorporating the grain of the wood into the print.

This linocut from 1956 is typical of his prints from the period and features two of his favourite motifs.