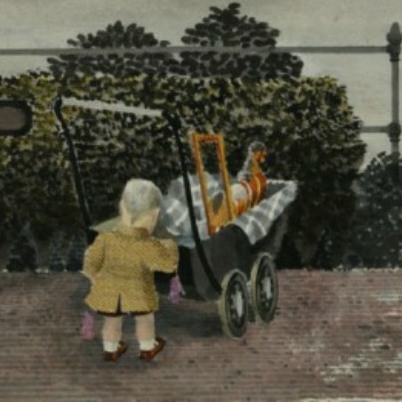 Rowntree was born in Yorkshire to a Quaker family. He trained as an artist under Barnett Freedman and eventually moved to the Slade School in London.

This painting with its unusual combination of images is typical of the work which Kenneth Rowntree completed in the years 1940 to 1943. His gift for evoking a particular place had been fully exploited during the war years, as he was one of over 60 artists commissioned by the Government and financed by the Pilgrim Trust to record the face of England and Wales before development changes and wartime destruction changed the country beyond recognition.

Rowntree’s choice of quirky subject matter and keen sense of design made him the ideal interpreter of some of the more unusual aspects of our built heritage.This painting shows a small boy with a pram and toy looking out to the South coast. Smoking ships in the distance and curled barbed wire illustrates that it is wartime and everything is not normal. The very prominent red triangle sign, in the foreground, indicates a hazard, but what?

Many of Rowntree’s paintings from this period feature detailed lettering and signage, which became devices providing extra information and architectural qualities to his work. The work evokes an eerie atmosphere, as the small boy, his son Adam, is very much on his own, with hno one else in the picture and possible danger close by.

Rowntree was born in Yorkshire to a Quaker family. He trained as an artist under Barnett Freedman and eventually moved to the Slade School in London. In 1941, Rowntree moved to Great Bardfield with his wife Diana, and they were helped in their move by Eric and Tirzah Ravilious who had been living there for some years. In the late 1940s Rowntree worked on a number of design commissions for books and prints, including King Penguins and the School Print series.

The Rowntrees left Essex in 1941, when Kenneth moved to the Royal College of Art. He was then appointed professor of Fine Art at Newcastle University, in 1959, where he was influenced by his tow fellow tutors, Victor Pasmore and Richard Hamilton.