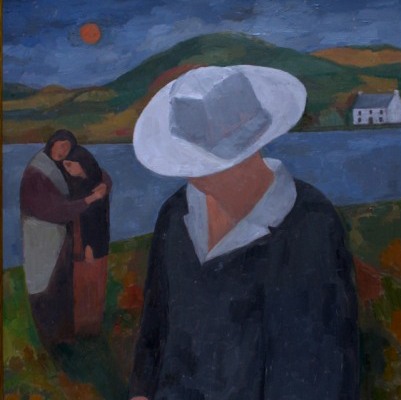 Duffy Ayers was born Elizabeth Fitzgerald. She was one of a pair of identical twin girls born to her American mother and Irish father, and was known for most of her life by the nickname “Duffy”.

She trained at the Central School of Art in London, and later married the painter and printmaker Michael Rothenstein RA. In 1941 the couple moved to Chapel Cottage in Great Bardfield, and relocated the next year to Ethel House in the centre of the village. Duffy and Michael were important members of the art community resident in the north Essex village during the post-war period. At Great Bardfield she was mainly known as Duffy Rothenstein, although she still painted under the name Betty Fitzgerald. The Rothensteins, along with other village artists, organised a series of large open-house exhibitions that garnered much press attention during the 1950s. During this time Duffy painted mostly portraits, and exhibited some of her work at the 1955 Great Bardfield Artists’ summer exhibition.

By the end of 1955 her marriage to Michael Rothenstein had dissolved, and she left Great Bardfield. She settled in Bloomsbury, London, and married the graphic artist, Eric Ayers (1921 – 2001). After her second marriage she painted under the name of Duffy Ayers, and regularly exhibited at the Royal Academy.

This work is a typical figurative oil painting from her work in the 1990s, showing three unidentified figures, one possibly being comforted at a distance from her mother, who bows her head, set in a pastoral hilly and watery landscape. Duffy often portrayed solitary, lonely figures, usually with their backs turned or faces hidden. This possibly reflects back to her feeling of abandonment during her childhood, when she was sent away to an isolated convent school, where she felt devoid of affection and kindness.