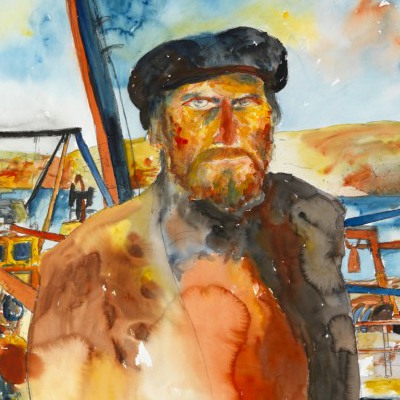 John Bellany was born in Port Seton on the coast of the Firth of Forth, but now has strong connections with the North West Essex area, as well as with Italy. During the 1960s, he studied at Edinburgh College of Art and then at the Royal College of Art in London. In much of his work, he has drawn inspiration from the coastal communities from which he came. Many of his paintings depict the fishing community: either oil paintings of harbours, or portraits of the fishing community people. His health problems, which led to a liver transplant, have also inspired works. His work is held in many prominent collections, including The Museum of Modern Art, New York, The Metropolitan Museum, New York, and Tate Britain, London