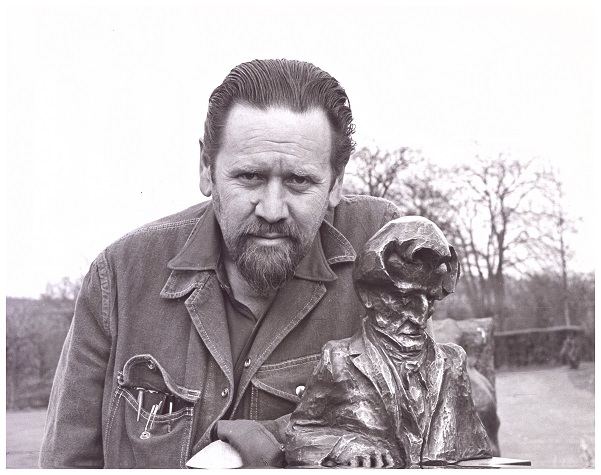 2021 is the centenary of Michael Ayrton’s birth.

Among the exhibitions in 2021 is A Singular Obsession – celebrating the centenary of Michael Ayrton, here at The Fry.

Ayrton’s Minotaur is a striking denizen of the Barbican’s St Alphage Garden, while the legendary bronze sentinel, Talos, glares out from Cambridge’s Guildhall Street: powerful images born of a deep involvement with myth, for its own sake and as an expression of basic truths about the human condition, fundamentally relevant to contemporary life. But Ayrton was far more than simply a sculptor. A man of widely diverse interests and talents, he began as a painter in the Neo-Romantic style of the 1940s, alongside Graham Sutherland, John Piper and others, while working as a stage designer for Sadler’s Wells and Covent Garden. He was a successful illustrator, an accomplished etcher and lithographer; he was also at various times a broadcaster, art critic, and the author of four novels, two collections of essays and a book of short stories.

Although much exhibited and regarded as important if controversial in his lifetime, no major retrospective exhibition of Ayrton’s work has been held since shortly after his untimely death in 1975, and only three substantial publications have appeared since then, the last in 2004. To celebrate his centenary the Ayrton Estate has produced an illustrated volume of works accompanied by essays from a range of eminent contributors, some of whom knew Ayrton personally, while others first encountered him through his work. A new Ayrton website with information about his life and career, news of forthcoming events and an ongoing catalogue raisonné will launch on 20th February, to mark his 100th birthday Exploration of his many-facetted career requires an equally multi-stranded approach. His centenary will also be marked by several major exhibitions including works last exhibited in his lifetime, or in some cases exhibited for the first time.[/vc_column_text][vcex_spacing][vc_single_image image=”1132″ onclick=”link_image”][vc_column_text]Michael Ayrton | Minotaur Waking | 1972 | Bronze – on display at The Fry Art Gallery from 29th May 2021[/vc_column_text][vcex_spacing][vc_column_text]Exhibitions