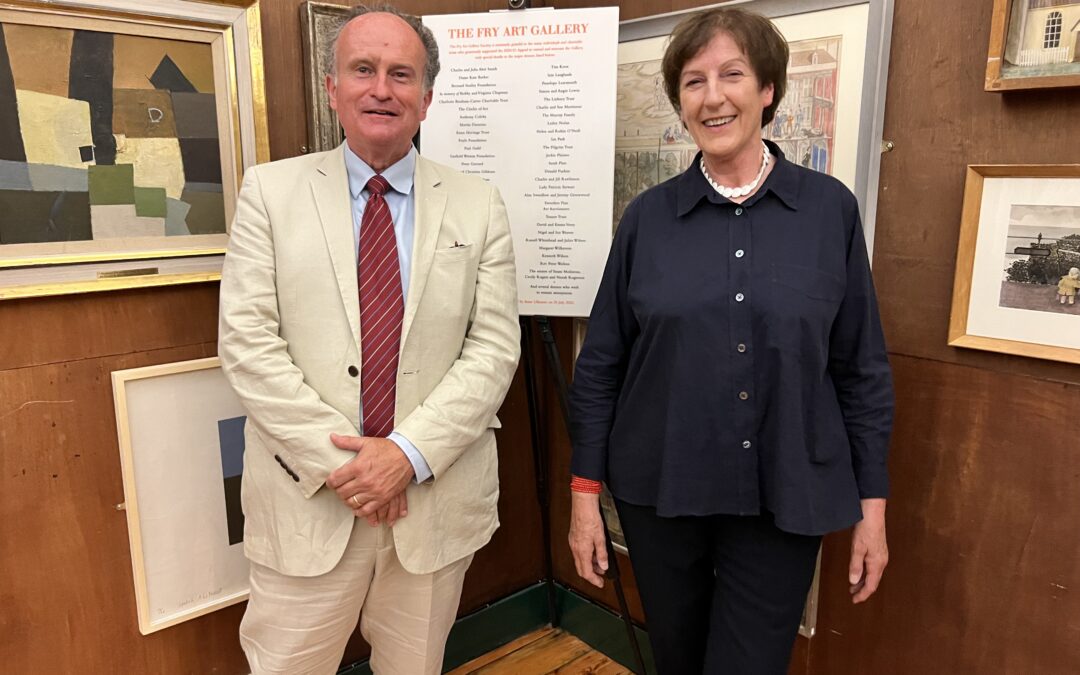 Dr Frances Spalding after the unveiling of the Donors’ Board, with Fry Chairman Sir Roderick Newton.

Sunday 24th July saw the official opening of the extended and refurbished Gallery by the art historian, critic and biographer, Frances Spalding.

Following extensive building works, the Gallery now has a new store, office, kitchen and an accessible entrance. The marbling in the entrance hall has been painstakingly renewed by Tessa Hawkes and the heating upgraded in the main Gallery.

Frances Spalding read art history at the University of Nottingham and began writing pieces for the TLS, The Burlington Magazine and art journals while still a post-graduate. She has a specialist interest in twentieth-century British art and first established her reputation with Roger Fry: Art and Life. She went on to write lives of the artists Vanessa Bell, John Minton, Duncan Grant, Gwen Raverat and John and Myfanwy Piper, as well as a biography of the poet Stevie Smith. Her survey history, British Art since 1900, in the Thames & Hudson World of Art series, has been widely used in schools, colleges and universities, and in the mid-1990s she was commissioned by Tate to write a centenary history of this national institution. Between 2000 and 2015, she taught at Newcastle University, becoming Professor of Art History. She acted as Editor of The Burlington Magazine, 2015-16, and is now is Emeritus Fellow of Clare Hall, Cambridge. She is also a Fellow of the Royal Society of Literature, an Honorary Fellow of the Royal College of Art and in 2005 was made a CBE for Services to Literature. Most relevantly she is Trustee of the North West Essex Collection, housed at The Fry Gallery.